In the previous blog, we talked about the Healthcare industry and the complexity of its privacy and security requirements. We also highlighted a modernization effort resulting in outdated legacy applications that still contained critical, regulated data. With Application Decommissioning and  InfoArchive, we saw how these systems could finally be turned off—saving millions of dollars and reducing compliance risk. 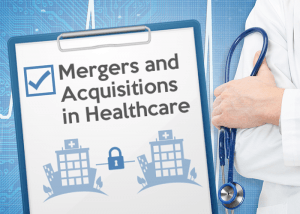 In this blog, we’re going to look at another huge trend in healthcare—merger and acquisition. “Huge” may be an understatement. In the last quarter of 2014, the dollar value of pending and concluded healthcare mergers was around $100 billion dollars, and nearly 300 deals were in play.[1] Experts say that this trend has been going on for a long time and is expected to continue, “seemingly unabated.”[2] All this activity is creating significant issues for IT organizations, as multiple disparate systems keep getting brought together.

Typically, one platform wins over others, and with time becomes the production system for all active data. But the inactive legacy data—which still needs to be searched, secured, and kept private—is usually left with the old application. Often, that application is already outdated and in need of replacement, but stays alive because the data must be actively retained. The related maintenance costs can be significant. Furthermore, the newly merged organizations are likely to carry the same kind of baggage from previous mergers and modernization efforts. Thus the total number of these expensive “read-only” legacy applications can accumulate rapidly.

As an example, let’s look at a large health insurance provider, made up of six businesses serving more than 75 million people worldwide. Due to a sequence of acquisitions, many millions of dollars were being spent to maintain hundreds of outdated, read-only legacy applications. Most of the legacy platforms had been around for decades, and finding people who knew how to maintain all the various environments was becoming increasingly difficult.

As is our typical practice, we began with an analysis of all these systems and came up with a strategic plan identifying which applications were candidates for decommissioning, what the logical order of decommissioning should be, and what cost savings could be expected. Then we worked with the client to select a few highest priority candidates for a proof of concept. In this case, three mainframe-based modules were chosen—Healthcare Information, Explanation of Benefits (EOB), and Billing Statements—made up of 10 underlying applications. All were running in an antiquated data center on machines using old versions of the Pick operating system and Universal database.

With the help of a variety of ETL (Extract-Transform-Load) and XML tools, we were able to convert a whopping 8 terabytes of mainframe EBCDIC data into XML format and create three corresponding repositories in InfoArchive. Using the XML-based tools in InfoArchive, we then recreated over 45 legacy queries and reports using formats that were similar and in many cases identical to the original mainframe versions. For the Explanation of Benefits, we also integrated the data with the existing Xerox-based printing system. Custom screens used role-based masking of PHI values, access security was seamlessly integrated with the existing CA SiteMinder environment, and a full chain-of-custody audit trail was preserved for the conversion. These and ongoing audit trail logs are integrated with the existing EnVision enterprise log management platform.

From just this proof of concept, over a million dollars in annual savings were achieved. And based on these results, the company is now in the process of decommissioning several dozen additional applications.

In another case, we were able to help a large non-profit health system—the result of a merger of four separate non-profit health systems—develop a strategic plan to consolidate legacy patient data spread across over 600 applications. This application decommissioning “factory” is designed to move quickly, but in a logical sequence that preserves efficiency and quality. It’s also designed to stay flexible and adaptable, scaling up and down as business requirements and changing priorities dictate. As with the previous example, the result will be seamless, compliant XML-based patient records stored in  InfoArchive. As the plan progresses, cumulative savings of many millions of dollars are expected to be realized.

A similar plan is being developed with another large health system that is in the process of acquiring many smaller doctors’ practices and merging all their patient information. In this case we are installing the Application Decommissioning infrastructure together with InfoArchive and Clinical Archive products—and working to make the client as self-sufficient as possible in carrying out the Application Decommissioning program.

Clearly, the Healthcare industry is rife with Application Decommissioning opportunities. But it is not the only place significant money can be saved. In the next blog, we’ll turn our attention to the Financial Services industry.