After looking at Healthcare in the past few blogs (see Part One and Part Two), we now turn our attention to the Financial Services industry—and more success stories for Application Decommissioning and InfoArchive. 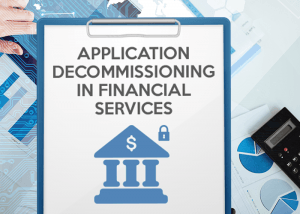 Let’s begin with an example from the traditional banking side of Financial Services. Like the rest of the industry, today’s banking environment continues to be profoundly affected by the aftermath of the financial crisis of 2007-2008. Since then, Federal Reserve policy has forced a prolonged period of unprecedented low interest rates, making it difficult for banks to make a profit.

At the same time, business volume has suffered the “double whammy” of weak loan demand just as loan approval criteria have become dramatically stricter. In response to the financial crisis, government has enacted a slew of new and expensive compliance regulations such as the Dodd-Frank Act, Volcker rule, Basel III reforms, and others. Taken together, these have been described as “the most sweeping expansion of regulation for U.S. financial institutions since the Great Depression”.[1] And all of this has been happening while banks are forced to make key investments in state-of-the-art electronic and mobile banking just to stay competitive.

What Banks Are Doing to Survive

In many cases, the answer to surviving has been to merge with other banks in order to create more efficient economies of scale. This allows them to spread administrative and compliance costs across a larger revenue base, while also reducing overall risk. At the same time, banks are making strategic acquisitions to expand product lines and fill in gaps like lack of mobile banking expertise. But while these strategies have proven to be effective, with mergers and acquisitions come the headaches of integrating previously separate operations.

In fact, in a recent survey 60% of bank leaders cited post-merger integration as the most difficult aspect of these deals.[2]  And a large part of this problem is integrating all the disparate information systems and databases that keep getting inherited with each deal.

While many of these systems are no longer actively used in production, regulations force banks to keep their data accessible in real-time for financial “stress testing” and other purposes. Especially when these legacy systems are on old and outdated platforms, this can become extremely cumbersome and expensive. And because acquired banks often have their own set of such outdated applications, this problem grows exponentially in a climate of frequent merger and acquisition.

BMO Harris, a large commercial bank with over $195 billion in assets, found itself in exactly this situation. With a long history of mergers and acquisitions, BMO had amassed over 100 legacy applications that were extremely expensive to maintain but were kept running in read-only mode to comply with data access and retention requirements.

After acquiring M&I Bank in 2010, BMO decided to embark on a comprehensive Data Retention and Decommissioning (DRD) program to proactively address this issue. Working with Flatirons, BMO decided to start the effort with a large PeopleSoft financial management application consisting of three modules and their corresponding databases: General Ledger, Accounts Receivable and Fixed Assets. The goal was to extract the related legacy data to a central repository where it could be retained and accessed in a fully compliant manner—and then shut down the old PeopleSoft platform which was costing more than $285,000 per month to maintain.

Due to strict regulations, this had to be done with complete audit trail and chain-of-custody tracking—and the new repository had to rigorously support all the relevant data security, privacy, retention, and disposal rules. To be effective and minimize user adoption issues, it was also critical that legacy reports were reproduced as closely as possible to their original form.

Using our Application Decommissioning solution built on InfoArchive, we were able to complete this project in less than 3 months. In all, over one terabyte of legacy data was successfully extracted and converted to XML format to be stored in InfoArchive.  Using a set of familiar web tools, we were able to build state-of-the-art search screens that display data in multiple grids with drill down capabilities—and also faithfully reproduce all the legacy reports that the business and regulators were used to seeing.

From this pilot project alone, BMO was able to realize savings of over $5 million dollars per year. Calculated over 7 years, the ROI was dramatic and unprecedented. In fact, the savings were so significant that the entire cost of the project was paid back in less than 12 months.

This has allowed BMO to redirect the old maintenance budget to address strategic priorities for new applications, and to completely retire the legacy PeopleSoft platform.  Based on this success, BMO is already working on decommissioning the next wave of legacy applications—and other banks are following in their footsteps.

In our next blog we’ll look at another side of the Financial Services industry—the turbulent and highly regulated world of credit card processing—and another successful project. In this upcoming example, you’ll also discover a different and exciting twist to the power of InfoArchive.